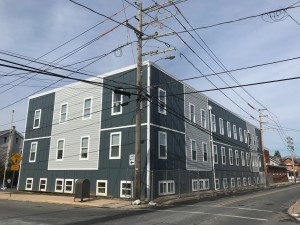 Mission First replaced the façade of the building’s main 3-story structure to prevent chronic moisture infiltration and added insulation, replaced all of the windows with new energy efficient windows throughout and replaced the roof. Mission First also upgraded the HVAC system, kitchens, bathrooms and flooring in the apartments where needed. Common areas were painted and new lighting and flooring was installed. Finally, the vestibule was rebuilt and a lift was added to make the building handicapped accessible.

Park Place Apartments is part of a five-property portfolio in York and Lancaster Counties acquired by Mission First in May 2018, and one of the few affordable housing resources in Elizabethtown. The building is a former factory which was converted to affordable housing in 1989 and had not been updated since.