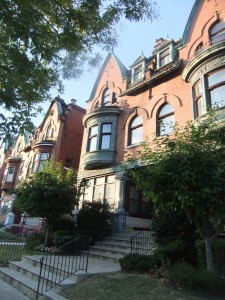 These stately Victorian-era homes adjacent to Fairmount Park in West Philadelphia were constructed in the early 1900s by immigrants of German descent. Less than a century later, the entire neighborhood of Parkside had fallen into a deplorable state of deterioration and blight.

Through funding from Historic Tax Credits, Low Income Housing Tax Credits and the Federal Home Loan Bank of Pittsburgh, among others, Mission First created 82 units in 16 buildings, 12 of which are certified as historic. In addition to gutting and modernizing the interiors, Mission First took care to maintain and restore the historical integrity of the exteriors. Marble columns, wrought-iron gates and copper detail work on the facades of the buildings were restored to their original state.  The look of the curved glass with copper bays in the front windows was preserved, and the distinctive front porches were restored to their original grandeur.

Today, the project provides housing for 103 individuals from all walks of life. Residents enjoy their picturesque location on the edge of 9,200-acre Fairmount Park, the largest city park in the world, which provides access to museums, scenic trails, bicycle paths, historic monuments and sculptures. Within easy walking distance, residents also enjoy the Philadelphia Zoo and the Mann Music Center.